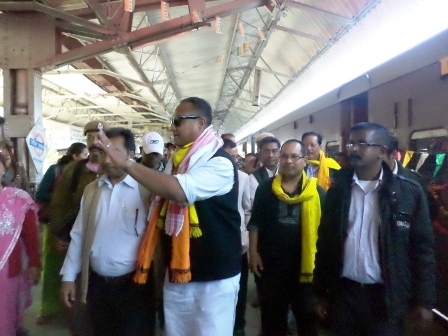 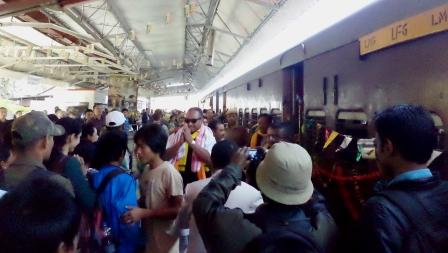 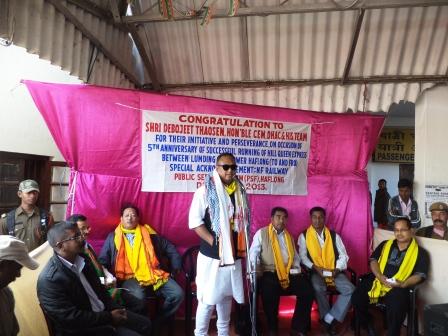 Haflong, February 19:- The Chief Executive Member of Dima Hasao Autonomous Council  Shri. Debojeet Thaosen and Executive Members arrived this afternoon at Lower Haflong Railway Station by Hill Queen train from Lumding to mark the train’s fifth Anniversary of the Hill Queen, serving the people of this area, especially for the people of Dima Hasao District and adjoining areas.
In this connection, a felicitation programme was organized by the public Service Forum,Railway workers and other organizations at Lower Haflong Railway Station, wherein Shri.Thaosen was felicitated by different organizations in recognition of his good service to the general public as it was due to his  initiatives that this special train ‘Hill Queen’ was started in 2008, running to and fro, in between Haflong and Lumding.
In his short speech, the CEM Shri Debojeet Thaosen extended his thanks to the then General Manager of NF Railway Shri. Ashutosh Swami who had given much attention to the needs of the public by taking steps to introduce the train. He also dwells in length on the importance of the train and will also try to continue , resume service of the train until the completion of the BG line construction tunnel no.10.
The meeting was  also attended by the DHAC Deputy Chairman Shri.Madhuram Joishi,EM Kalijoy Sengyung, EM Bokul Bodo, EM Subrata Hajoi, MAC  Kulendra Daulagupu.
http://haflongtimes.com