Assam’s Dima Hasao At A Crossroad On 9 March, the longest standing militant organisation in the Dima Hasao district in Assam, the Nunisa faction of the Dima Halom Daogah, formally disbanded in a ‘Homecoming ceremony’

Marking the winds of change, the Dima Hasao district in Assam (formerly called the North Cachar Hills) was deemed as a focus district by the Industries and Trade Fair Association of Assam (ITFAA) at the International Guwahati Trade Fair (IGTF) 2013 held earlier this year. In the last two decades, IGTF has come to become the greatest trade exposition in this part of the country, with at least 10 foreign countries participating each year. There were stalls of beautiful handicraft items, local garments, decorative items and jewellery, local utensils, woodcraft and many other unique items from the focus district including a colourful tourism promotion stall. Even the possibility of a pavilion of this kind would have gone down as a joke a few years ago; such was the black spot of terrorism, violence, killings and turmoil that one associated the North Cachar Hills with.
A watershed day in the history of the Dimasa Tribe of Assam came on 9 March, when the longest standing militant organisation in the district, the Nunisa faction of the Dima Halom Daogah (DHD), formally disbanded in a colourful ‘Homecoming ceremony’ in Haflong, in front of thousands of people. DHD is a descendant of the militant outfit Dimasa National Security Force (DNSF). It was formed in 1994 after the surrender of the Dimasa National Security Force and came out for talks in 2003, following appeals from the civil society and intellectuals. However, Jewel Garlosa, the founding chairman of the outfit deviated away after refusing to come for talks and formed the DHD-Jewel (DHD-J) also known as the ‘Black Widow’. The Black Widow unleashed a reign of terror in the district but was ultimately convinced in October 2009 to come out and surrender. The district from then on has seen a semblance of peace and normalcy although it still reels under poor conditions and underdevelopment, a direct result of the neglect, unprecedented corruption and siphoning of public funds that it has faced over the years.
Following the ceasefire, DHD-N had several rounds of talks with both the Central and State government regarding the demand for creation of a ‘Dimaraji state’. After nine years of bitter animosity, the two factions of DHD came face to face last year and ultimately signed a Memorandum of Settlement (MoS) together with the State and Central government on 8 October 2012. As per the MoS, both the DHD factions would have to be dissolved within six months of signing of the pact.
The Jewel faction disbanded last year in November and from then on called itself the ‘Jewel Welfare Society’. But a bitter vendetta earlier this year, ostensibly over financial issues, further split the outfit and the deputy commander-in-chief- of the outfit, Daniel Garlosa, formed his separate group called the ‘Hill Welfare Society’ with himself as the Finance Secretary and Piprang Dimasa (who was the Deputy Chairman in the DHD-J) as the President.
All eyes were on Dilip Nunisa and his faction (DHD-N) and the much awaited ‘Homecoming ceremony’ of the DHD-Nunisa (DHD-N ) that was held at the District Sports Association ground in Haflong as the Nunisa group finally disbanded. As the DHD-N ceased to exist, the outfit got transformed into a democratic non-armed civil body called the ‘Halali Progressive Welfare Society’ (‘Halali ‘stands for ‘fertile land’ in the Dimasa language). 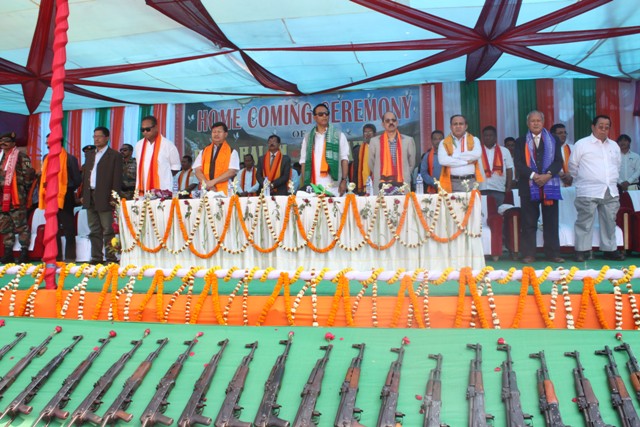 However, the turn off in the ‘Homecoming ceremony’ was the absence of bigwigs like the Union Home Minister, the CM and the Governor, who were all scheduled to come originally. While many read the no show of Sushilkumar Shinde as gross negligence shown towards the Dimasas, the absence of Gogoi was more to do with the political upheaval going on at Dispur at that time. However, this didn’t dampen the spirit of the 2009 odd DHD-Nunisa members to turn out and a large gathering of the Dimasa people welcomed them back to the mainstream.

The DHD-N gave up from its possession (which was in double lock up till now) 144 arms including LMG’s, M-16 Rifles, AK-47 and AK-56 rifles, rockets, grenades, grenade launchers and other assorted weapons including 4,408 bullets. There were 1,318 political cadres or PRO’s (as they are called in DHD-N parlance) who came out and 691 armed cadres including 37 female cadres in fatigues. All top DHD-N leaders including Chairman Dilip Nunisa, C-in-C Pranab Nunisa, Organising Secretary Ronsling Dimasa, GS Yathong Dimasa and Asst General Secretary, Rajesh Naiding were present and they took turns to hand over arms as token on behalf of the whole outfit.
Dilip Nunisa (Chairman DHD-N), while addressing his cadres and public, summed up the mood saying it was an occasion to be sad as well as happy at the same time. “Having led a movement and a body for so long, to see the day when it is being disbanded brings a tinge of sadness, particularly when we have left our armed revolution on hope and faith and signed the MoS keeping the development of the area and people in mind. However, we have laid a charter of demands and we expect the Central and State government to reciprocate our gesture and fulfill our demands,” he said. Nunisa said that it was a happy day to make a new beginning but he was categorical in pointing out that the ‘Halali Progressive Group’ will also keep alive the dream of a separate ‘Dimaraji state’ for the Dimasas. “The only difference is that our armed revolution will turn into a democratic and civilian movement. But our end and objective will remain the same. The MoS that we signed did not address all our aspirations and we appeal to the government to consider them afresh”, he said.
Originally ‘Halali Progressive Group’ was the name chosen for the outfit after disbanding and Chairman Dilip Nunisa had himself made the announcement at the ceremony itself. But just a couple of days later, Nunisa himself revealed that following a meeting held after the ‘Homecoming ceremony’, it has been decided to change the name of the democratic civil body comprising the DHD-N cadres from ‘Halali Progressive Group’ to ’Halali Progressive Welfare Society’ . ”The term ‘group’ may hold other connotations and create a vested image, so we decided to change the name,” was Nunisa’s explanation.
BY-SANDEEP BANERJEE
Tehelka.com
By::::::::: Unknown at 10:59:00 AM