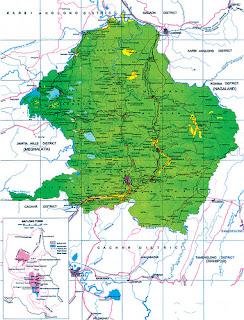 i)     Harangajao ITDP block
ii)    Jatinga Valley Development block
iii)     Diyang Valley Development block
iv)     Diyungbra ITDP block
v)    New Sangbar  Development block.
There are 552 revenue villages and as the district fall under the 6th schedule area, development administration has been conducted by the Autonomous Council, there are 27 MDCs areas and they represent as local bodies at grass root level, selected on public franchise like the PRI representatives in the plain districts.
Demography
As per 2001 Census the total population of the district is 186189  which is 7% of the state’s total. The domestic decadal growth is 23.47 which is higher than the state average 18.85. The BPL families are totaled to 15043 which is .5 p.c. of the total families of the state. The other important demographic indicators of the district are listed below:
Parameter              N.C.Hills                        State
Density             38 per sq. km             340 per sq. km
Sex-ratio          per 1000-883(f)           932 per 1000
Source: Statistical Hand Book, Assam,2003
Agriculture
It is predominantly a forest area and agricultural practices of paddy cultivation is done on jhuming cultivation system in dry hilly land in the plain terrain areas depending mainly on rainfall which is also irregular. The normal rainfall of the district is 2000 mms. The land use pattern of the district is shown below
Areas in hectre
Normal & Actual Rainfall (in mm) for 3 years.
SOURCE :- STATISTICAL HAND BOOK ASSAM, 2003.
Area, production and yield of major crops for the year 2002-03 are as indicated below.
SOURCE :- AGRICULTURE DEPARTMENT. HAFLONG.
Land holding

Fertiliser Consumption
Per hectre consumption of NPK nutrient is 43 Kgs in the district. Consumption of nitrogenous and phosphatic nutrients has steadily increased for increase in area of production of pulses and cereals.
The details of fertilizer consumptions are as below
The details of fertilizer distribution are indicated below.
Agriculture in the district mainly depends upon the rainfall. The net area irrigated under net area sown is 6%  that is much below the state’s average. The major, medium and minor irrigation projects with their details are shown below.

Animal husbandry
Dairying and rearing of cow and buffalo is a common place practice of the tribal population.
As per sample survey for 2001-2002 the estimated latest live stock Census of year 1997 the live stock population of the district are indicated below.