Goods train bombed, bus attacked in Assam ahead of R-Day 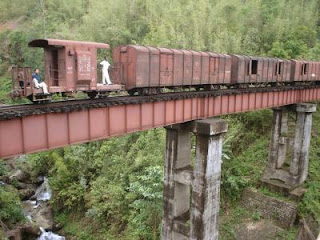 Tribal militants Tuesday (Jan 25) bombed a goods train and attacked a passenger bus wounding three people in separate incidents in Assam ahead of Republic Day. The running of all night passenger trains in the region has been suspended until Jan 30 on security reasons, officials said. Both the incidents are believed to be part of a renewed offensive by separatist militants to make their presence felt in the run up to the Republic Day celebrations. A police spokesperson said tribal militants triggered a remote controlled explosion near Maigrendisa in North Cachar Hills district, about 320 km of Guwahati. “The goods train engine got derailed in the impact of the blast,” railway spokesperson S. Hajong said. “There were no injuries or other damage caused to the train apart from the engine wheels getting derailed.” The train carrying foodgrains was on its way from Lumding to Silchar in Assam. The bomb was planted beneath a culvert. “We are yet to ascertain the identity of the rebel group involved in the attack,” a senior police official said. In another incident, a little known militant group called Karbi Liberation People’s Tiger (KLPT) attacked a passenger bus early Tuesday near Bokajan in Karbi Anglong district injuring three people, including a child. “The militants tried stopping the bus and when it failed to do so they opened indiscriminate firing using automatic weapons,” a police official said. The injured were shifted to a local hospital. The bus was on its way from Guwahati to Imphal. “Both the incidents are attempts by militants to make their presence felt ahead of Republic Day,” a police official said in Guwahati. Further an IED weighing 2 kg was recovered in Parakuchi of Palasbari area. This bomb was kept in a tiffin box and it was kept in side of a pond. No causalities were reported. Elsewhere in the northeast, security forces arrested four militants in separate raids in Imphal - two each from the People’s Liberation Army and the People’s Revolutionary Party of Kangleipak (PREPAK). “The four militants were arrested along with arms during search operations ahead of Republic Day,” Th Radheshyam, police chief of Imphal East district, said. Six frontline separatist groups in the region have called a boycott of the Republic Day and also a general strike from 1 a.m. to 5.30 p.m. Jan 26. The call has been given by the United Liberation Front of Asom (ULFA), the National Democratic Front of Bodoland (NDFB), Manipur People’s Liberation Front (MPLF) - comprising several major militant outfits in the state, the Kamatapur Liberation Organisation (KLO), National Liberation Front of Tripura (NLFT), and the Tripura People’s Democratic Front (TPDF). These groups are active in Assam, Manipur and Tripura. The six rebel groups announced their boycott Sunday through a statement e-mailed to journalists. Militant groups in the northeast have for years boycotted national events to protest New Delhi’s rule over the region, and have staged violent attacks in the run up to the celebrations to make their presence felt. Thousands of army, police and paramilitary troopers are standing guard in the northeast to foil militant attacks. Militant groups often target vital installations like road and rail bridges, oil installations, and security forces as part of their design.
By::::::::: Unknown at 2:13:00 PM